The strange citrus fruit of my garden 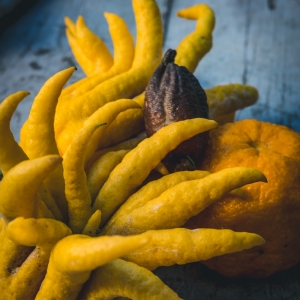 And the new year arrived and we are in 2020 now!
A few days ago Ι harvested the last of my citrus fruit from the garden.
From time to time I have posted pictures of my favorite citrus fruit on Instagram and Facebook and I am very proud of them as it was not easy getting them to Greece. 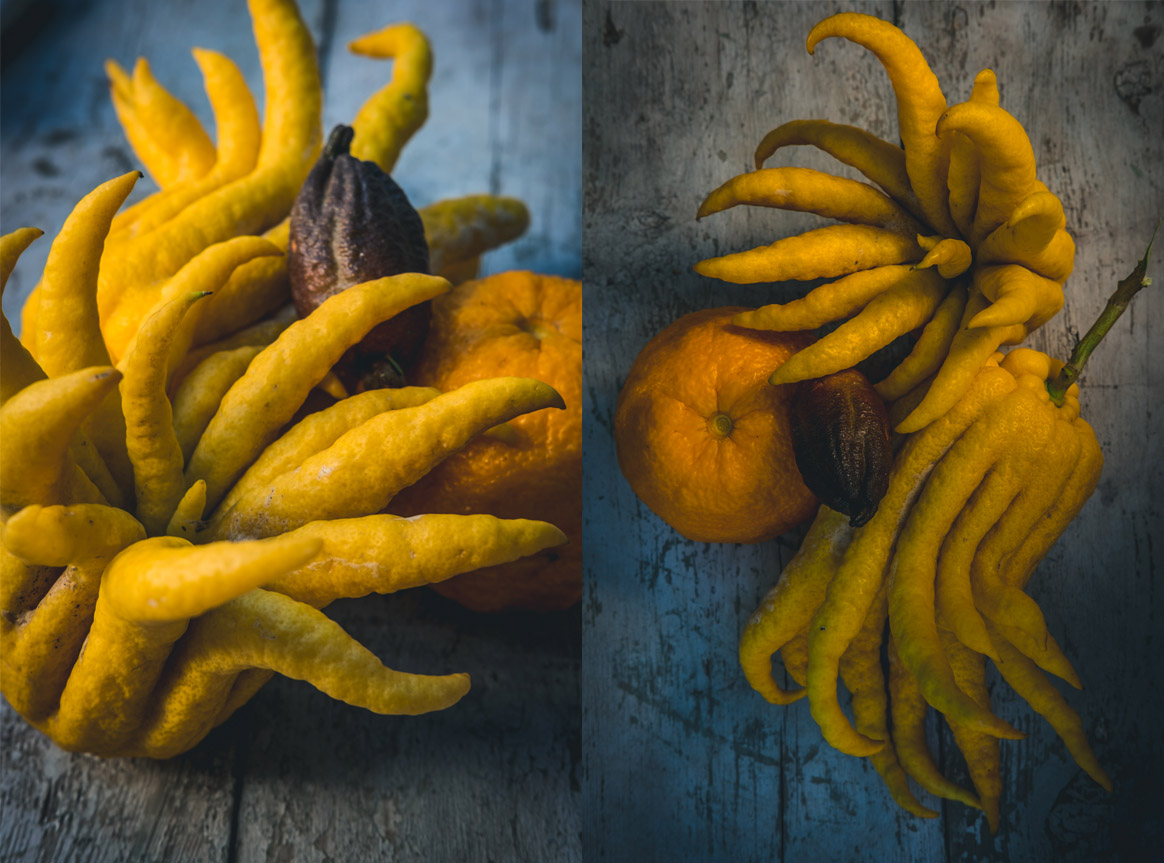 The one that looks like an orange is called Yuzu.

It is a citrus fruit that arrived in the west from the central part of China and one of the great things about it is that it can withstand low temperatures and so we can grow it in Greece even when the temp goes down to -9 celsius.
It's aroma is out of this world and it is something between a grapefruit and a tangerine.. The small tree starts bearing fruit after the tenth year and this is one of the reason that it is so expensive. 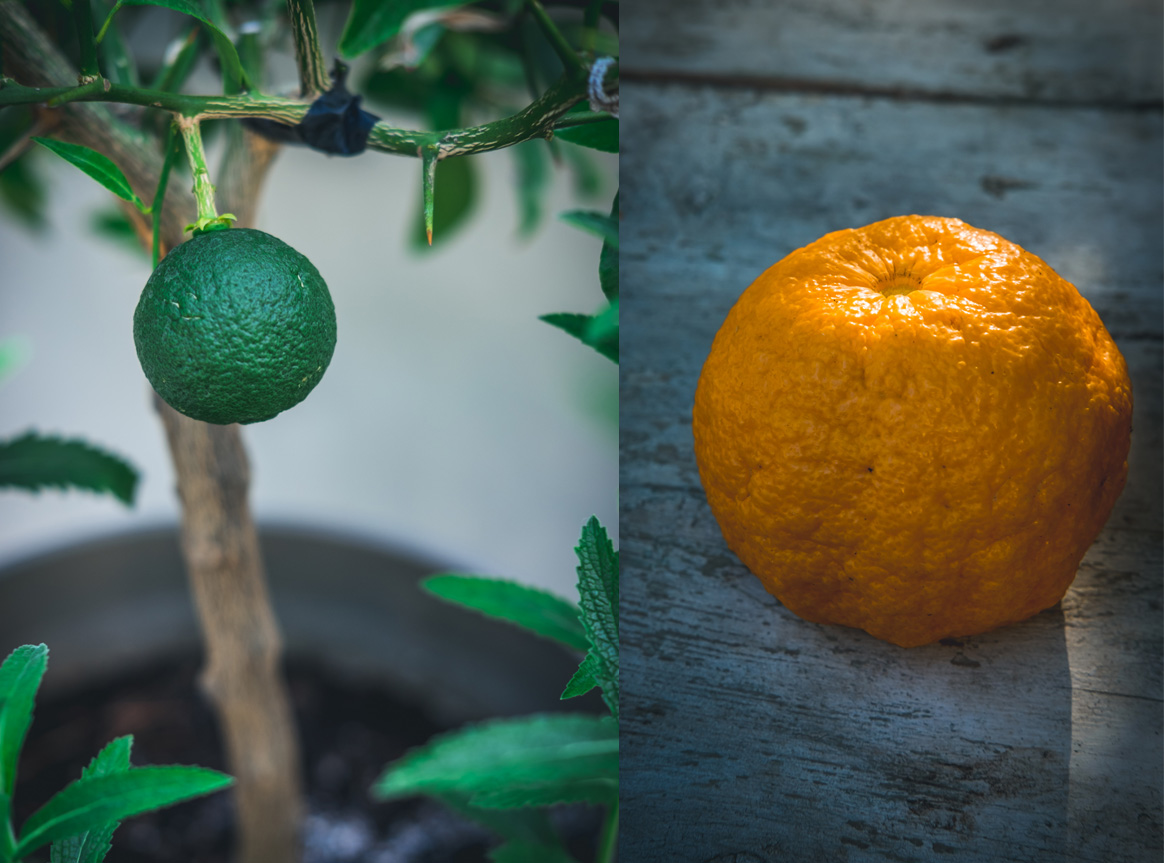 Another reason is that it produces a little bit of juice so it takes many fruit to have the juice that you get from one lemon for instance.
Also I have to add that the thorns on it are HUGE!!
In Japan they love it and use the juice and the skin but also they even use the whole fruit in your bathroom and take a bath with it.
It is customary that during the winter solstice people have a bath with a few yuzu fruit in their bath tub. So maybe if i have enough fruit next year i will take a Yuzuyu (this is how they call this special bath... :-) 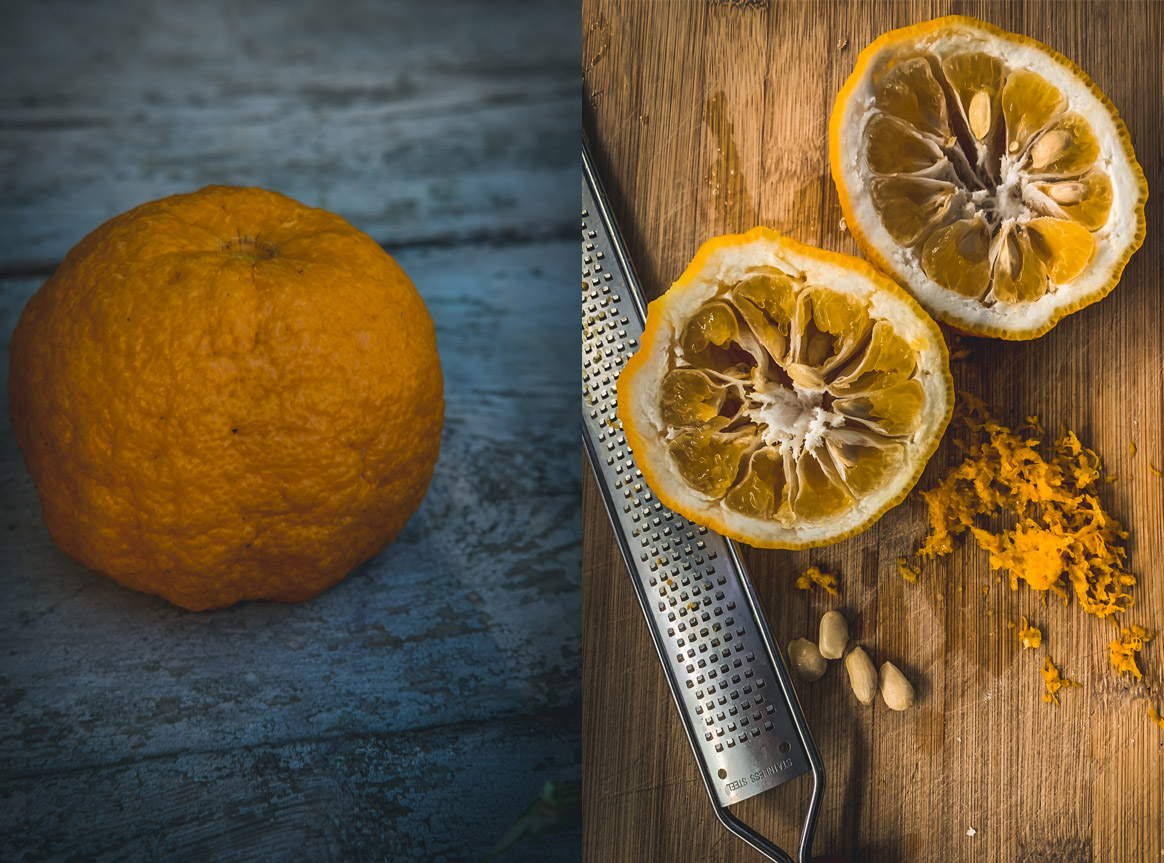 The other strange fruit with the elongated "fingers" is called the Buddha's hand. Exactly because the fruit resembles fingers.. It is another citrus fruit that comes from the central and northern parts of China as most of the citrus fruit do anyway.
The Buddha's hands are a type of Citron and there are many varieties with fingers totally apart or close together. 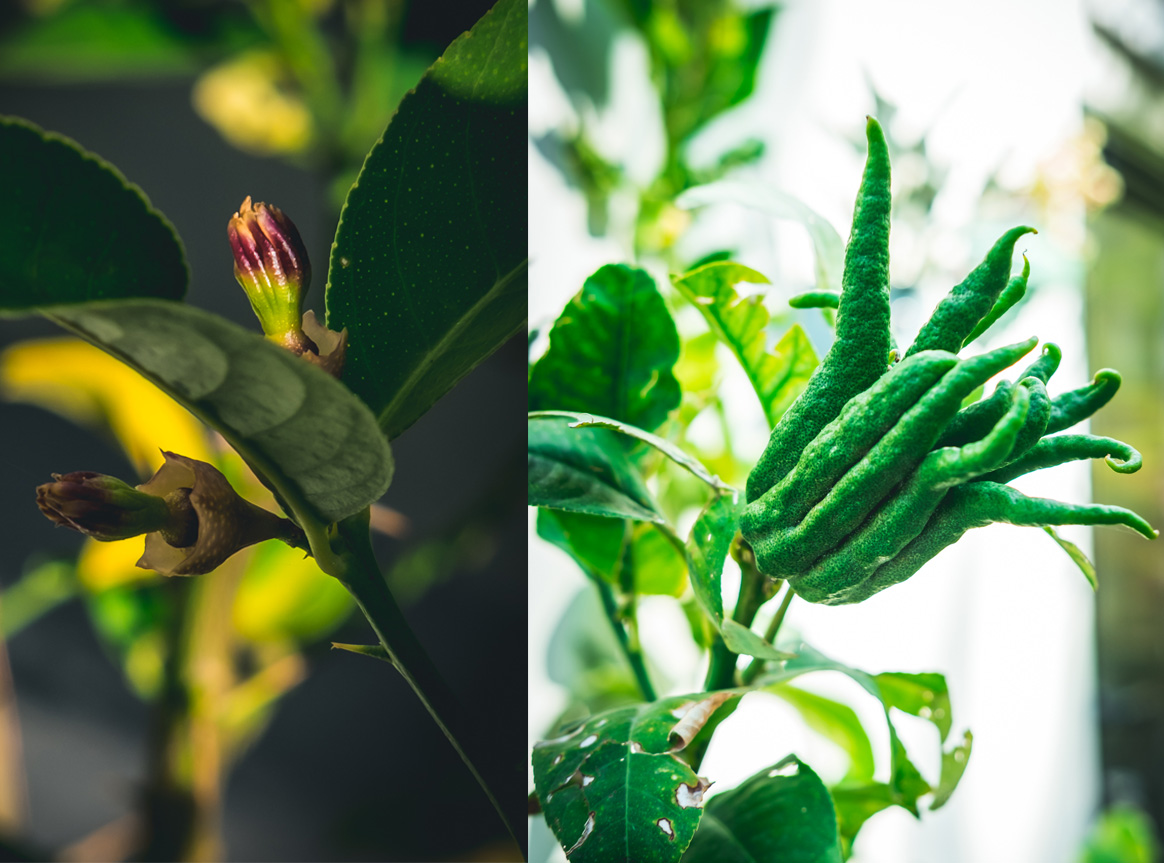 In Asia they are used as offerings to the temple and of course they prefer the fruit with the fingers close together that resemble fingers in prayer.
Other strange things about it is that it does not have any juice and the pith is not bitter. 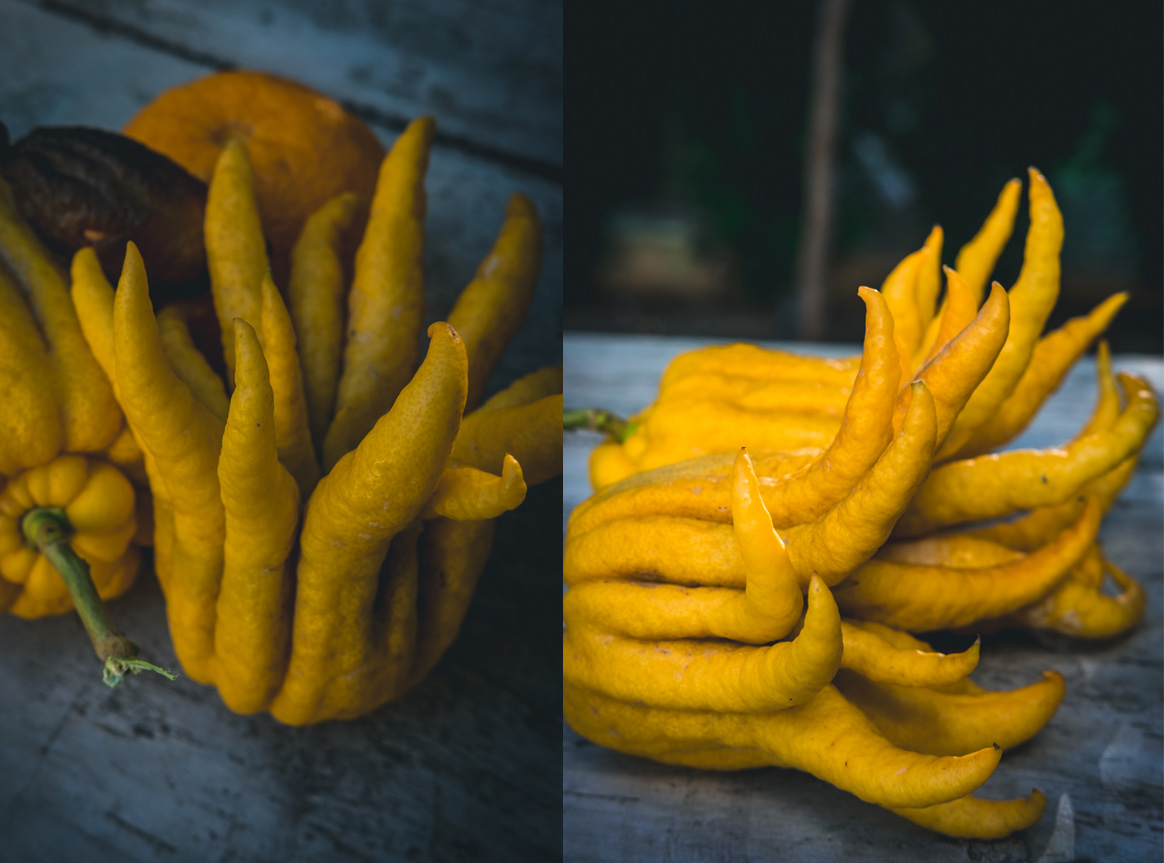 It is also used to give it's aroma to a room or for our clothes if you put it in a cupboard as it's scent is to die for. Also they turn it into desserts as it is very tasty caramelized and also they turn it into a kind of Lemoncello.
The tree has thorns as well but they are not as big and hard as the thorns of the Yuzu tree. Out of the three strange citrus fruit i have, it is the most civilised one... 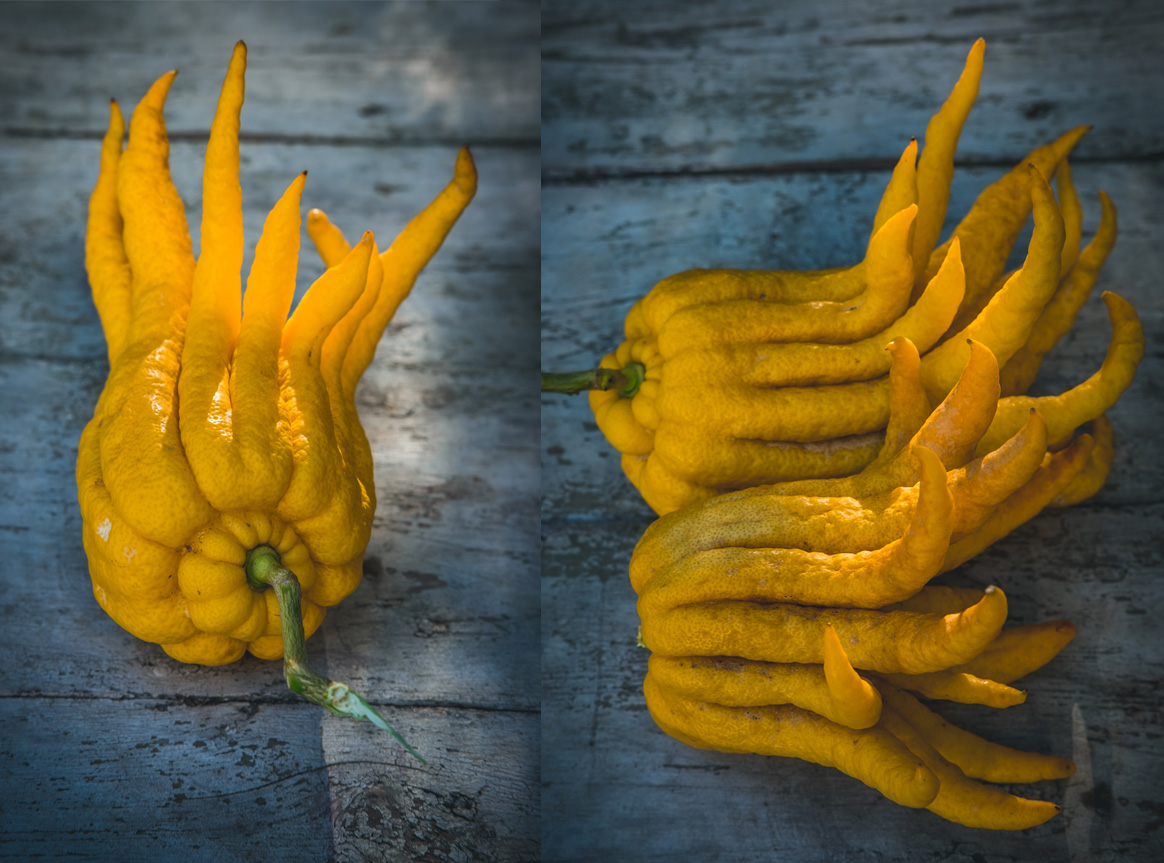 The third fruit I showed to you earlier is called Finger lime and it's fruit resemble fingers. The colour of the fruit when it is mature can be red or brown and the inside when mature is red or orange and yellow and green when still young. It's leaves are tiny and there are spines that are also very tiny.
It comes from Australia and the first people there were using it instead of lemon. 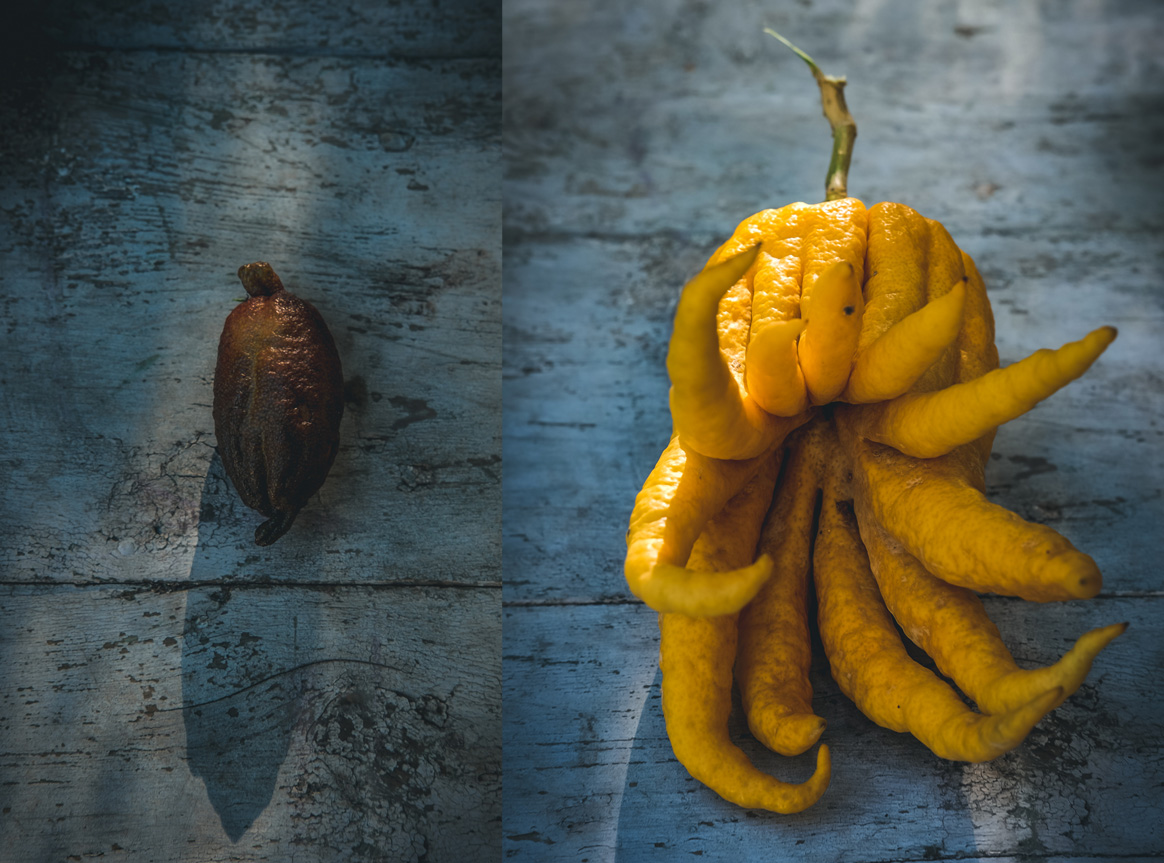 The incredible thing about it is that the flesh is not in segments like normal citrus fruit but there are tiny beads filled with the juice and in a way it resembles caviar..
It is used as decoration in gourmet dishes and it is very expensive... Fruit cost about 300 euros per kilo..

This year I had 200 grams of fruit so i guess it was rather good for the second year i am growing the plant...
There is also a lemon tree planted in the garden but the site where i have it does not receive a lot of sun and so it did not produce any fruit this year.. If the same thing happens next year as well i will be moving it in another part of the garden...

This is all the news about my citrus fruit! Hope I can make a few recipes using them to share with you!